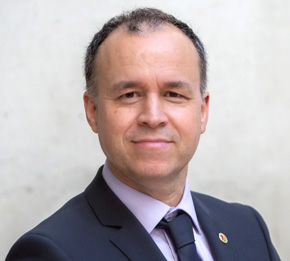 Patxi Arregui (Pamplona, Navarre, 1969) graduated in Industrial Engineering from the Tecnun School of Industrial Engineers in San Sebastian (1994) and holds a PhD in Telecommunications Engineering from the Public University of Navarre (2000), which he joined in 1995. After holding a range of teaching and research positions at the UPNA, in 2010 he was appointed Chair in Electronic Technology, a subject in which he has co-supervised 10 PhD theses. When named Vice-rector, he was Head of the Department of Electrical, Electronic and Communications Engineering, a Head of Department representative on the UPNA Governing Council and a member of its Permanent Committee. He has also been Secretary and Deputy Head of Department, and has sat since 2012 on the UPNA Research Committee, in which he has been a member of the Permanent, the Patents and the Events Committees.

His chief research interests are related to fibre optic sensors and nanostructured coatings. He was a member of the team which produced the first fibre optic sensor based on the "Layer-by-layer nano-assembly" method in 1998 at Virginia Tech, USA, where he carried out research in 1998, 2000 and 2004.

Thanks to his teamwork with UPNA researchers, he has authored more than 400 scientific papers, including over 170 articles published in journals with impact factor. These publications have been cited more than 6000 times, earning a Scopus h-index of 42 (around 8000 citations and h=48 in Google Scholar).

He is actively involved in the Editorial Boards of international journals and was the founding Chief Editor “Journal of Sensors”, with which he collaborated from 2007 to 2011. He has also been an Associate or Guest Editor of “IEEE Journal of Selected Topics in Quantum Electronics”, “IEEE Sensors Journal”, the aforementioned “Journal of Sensors” and “Sensors (MDPI)”, all of which are JCR indexed. He has sat on the Scientific Committees of national and international conferences, including “IEEE Sensors Conference”, “Eurosensors”, “CLEO Europe”, “SPIE Microtechnologies”, “ICST International Conference on Sensing Technology” and “Single-Molecule Sensors and NanoSystems International Conference”.

He is the editor of the book "Sensors based on nanostructured materials", co-editor of the book "Optochemical nanosensors" and co-author of two text books on digital electronics: "Solved problems in digital electronics" and “Problemas resueltos de electrónica digital”. He has also authored or co-authored more than 20 chapters for international books and made more than 170 contributions to international conferences (5 of which have earned prizes). He was guest speaker at 17 of these, including the opening plenary talk at the Eurosensors Conference.

As for knowledge transfer to the production sector, he has taken part in 25 OTRI contracts with private entities (11 as IP) and has co-invented 17 patents and utility models. He has also been a Development Partner of 5 technology-based companies, including NADETECH INNOVATIONS SL (2009 EIBT Navarra Network Prize, 2011 Ideactiva Prize, 2014 Best Campus Iberus Business Project Prize), EVERSENS SL (2015 Impulso Emprendedor, 2015 Campus Iberus Emprende Prize, H2020 - SME Instrument Phase I) and PYROISTECH SL (runner-up, 2019 Initiate Awards), all of which have been recognised as UPNA spin-off companies.