Navarre is in the north of the Iberian Peninsula, on the border with France. It is well defined from a historic and geographical perspective. Its surface area of 10,421 km2 contains an attractive variety of landscapes and cultures. From the Pyrenees mountains to the Ebro river, in less than 95 miles as the crow flies, there is a gradual and surprising transition: from the sharp calcareous peaks of the Roncal Valley Pyrenees and the wild karstic hills of Larra, to the dramatically dry clay-stone plains of the Bardenas area, on the Aragon border. 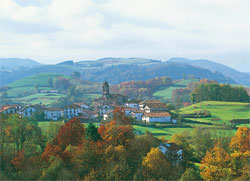 The Pyrenees represent 90 miles of natural border with France, with its mountains becoming less abrupt as they descend to the sea. The Mountain area, a land of fog and mist, woods and meadows, tiny villages and isolated farms, livestock breeders and timber concerns, can be summarised in the compact pine wood of the Roncal and Salazar valleys in the east, and in the shady beech woods which spread from the immense Irati Forest to the west.

The midlands form a transition area. The relief changes to the rhythm of the different mountain chains: Aralar, Urbasa, Andía, Perdón, Alaiz, Izco and Leyre. There is a wealth of welcoming valleys, small and cosy scenes. The journey from north to south ends at the bank of the Ebro river, which flows through the district capital, Tudela. On the south-western point of the river bank, in contrast to the green mountains of the north, we discover the indescribable landscape of the Bardenas, where erosion has etched a panorama of ravines and massifs in the clay surface, dotted with steppe-like vegetation.

In the last 40 years, Navarre has experienced a profound socioeconomic metamorphosis. The industrial deployment that began in the 1970s represented going from a basically agricultural economy to a balanced and dynamic economy fitting for a modern region. With this favourable evolution, Navarre has seen growing employment rates and a considerable decrease in unemployment. The per capita GDP of the Navarre Region is consistently five percentage points above the mean for the entire European Union. As a result of this, it is one of the Spanish autonomous regions with best social welfare indicators: healthcare, household equipment, educational and cultural level.

Although its impact on employment is relatively small (5.9%), the primary sector in Navarre is of significant sociological value and provides high quality raw ingredients for the industrial food sector. The two most important economic sub-sectors are motor vehicles and machinery. These and the third most important sub-sector, the food industry, represent over half Navarre's industrial GVA. In recent years, there has been outstanding progress in the wind power industry and a significant growth of the service sector.

The land in Navarre in generous and kind. There is abundant water in the mountains, guaranteeing the supply to cities and industries and irrigating orchards and other crops. Average rainfall per annum is 1,000 mm. Winters are cold, but not too extreme, with an average temperature of 6 °C and snow in the Pyrenees mountains. The low temperatures last until the spring, which arrives late, when summer is nearly at the door.

Summers, with an average temperature of 20 °C, mean humid hot days in July and August which are soon cooled by storms and northerly winds. Autumn emerges gradually in all its beauty, with gentle temperatures, full of colour, with changing skies and rain perfuming the atmosphere and filling the hillsides with mushrooms and fungi.

The population has grown from 307,669 inhabitants in 1900 to 661,023 in 2021, and population density has increased from 29 inhabitants per km2, to 63.4. Demographic growth has been less than the Spanish average and the density figures continue to be low. The district capitals, particularly Pamplona and its metropolitan area, have grown to the detriment of areas with a predominance of small rural villages.

During the Middle Ages, Navarre was crossed by the thousands of pilgrims who travelled to Galicia from Europe to visit to tomb of the Apostle Saint James in Compostela. This constant flow of people from different social and geographical origins brought cultural and artistic enrichment to the villages and towns of Navarre. 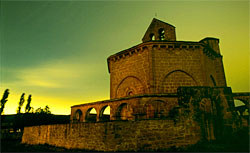 Some of the stopping places on the road to Santiago are: the Sancti Spiritus Chapel, in Roncesvalles, built in the 12th century and supposedly the place where the heroes of the Battle of Roncesvalles were buried; the Pamplona Cathedral, with one of the most beautiful Gothic cloisters in Europe; the Leyre Monastery, the mausoleum of the Kings of Navarre; the Church of Santa María in Sangüesa, with remarkable sculptures in its main front; the octagonal Church of Eunate, of Templar origin; the long Romanesque bridge at Puente la Reina, the Palace of the Navarre Kings in Estella; the Monastery of Santa María la Real in Irache; and the Church of Santa María in Viana, a National Monument.

These cultural and artistic attractions are surrounded by the beauty of natural landscapes: leafy beech, oak or holm oak woods, meadows, ferns, hills and springs..., a veritable paradise for nature lovers.