The Pamplona Campus: Arrosadia of The Public University of Navarre is to the south of Pamplona and has 757,000 square meters. It is in an open landscape, crossed by the modest Sadar river, the banks of which are thick with leafy white poplars characteristic of this part of the city.

At first sight, the Arrosadia headquarter is dominated by straight lines in its buildings and perspectives. The impressive 15,600 square metre Library, the largest of its buildings, forms the longitudinal axis of the campus. From the outside, it is seen as a solid prism which, inside, becomes an immense hall with a vault affording soft light, making it ideal for concentration and learning.

The Library is the centre of knowledge, a depository of science. It houses and distributes knowledge related to the different university disciplines, which is why the departmental buildings are located on both sides. It is a symbol and, at the same time, a reality. They all feed on the Library while increasing its contents with their teaching and research activities. 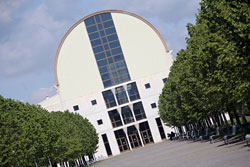 The Lecture Hall Building lies at the feet of the Library, a rectangular construction covering the northern edge of the campus. This is the closest building to the city and also has the largest car park, providing staff and students with direct access to its total of 122 classrooms.

Social life is encouraged by the walkway crossing the entire length of the campus. This was the intention of the architect (Francisco Javier Sáenz de Oiza), who brought the dimensions of the Sarasate Boulevard, in the heart of the Pamplona, to Arrosadia. At the end of this open space, we find the Rector’s Building, another prism crowned with a glass roof which, like another metaphor, welcomes the light from the exterior as it radiates the light from inside.

The University campus was designed by Francisco Javier Sáenz de Oiza (Cáseda, Navarre, 1918-Madrid, 2000), an architectural genius in theory and in practice. Born in Navarre, in Cáseda, he also designed the Monastery of Aránzazu (Oñate, Guipúzcoa, Basque Country), the headquarters of the BBV Bank in Madrid, the Atlantic Centre of Modern Art in Las Palmas, the Santander Festival Hall and the Oteiza Museum House in Alzuza (Navarre).

The creativity of Sáenz de Oiza is nowhere more evident than in Pamplona. He has created a serviceable and original university for the 21st century. On an area of just over a quarter of a million of square metres, he has woven a fabric of buildings ideal for work, study and the social life of the university community.