Optical Communications Group has a broad experience on fiber-optic sensors. From 1992 we have developed fiber sensors and sensors networks. Nowadays we develop both single-point and distributed sensors using our own fabrication technology. We also develop new multiplexing networks for our sensors or commercial ones using optical amplification when needed.

Optical fiber sensors have played an important role in applications where conventional electronic sensors could not attend the imposed requirements such as those in environments where electromagnetic immunity, small size of transducers, no electric power at the sensor head or other requirements were necessary. To fabricate sensing coatings on optical fiber, different deposition techniques could be used. In order to clarify this presentation, only two of them that have been used will be presented here, actually are the most utilized in the research group in order to implement sensors for smart structures, home automation and biomedical applications, among others. The first one is based on the deposition of gel based materials onto an optical fiber in either reflection or transmission schemes. One example consists of a standard single-mode optical fiber pigtail which ends were cleaved with a precision fiber cleaver. Once the fiber was prepared, the sol-gel based vapochromic material is deposited on one of the extremes. The other extreme of the fiber is connected to an optical coupler. So, the volatile organic compound sensor (VOCS) works in a reflection way. The set-up was completed with an optical source to generate the interrogating signal and an optical detector to measure the received modulated optical signal.

On the other hand, using the transmission scheme, three types of techniques have been more frequently used. One is based on tapered single-mode optical fibers. In this case, the sensing mechanism relies on the refractive index changes accomplished in a material film deposited on the thinner region of the tapered fiber. Following the same sensing mechanism the other technique used to access to the evanescent field of the guided modes have been the polishing of either standard optical fibers or silica-core plastic fibers. Using tapered optical fibers, not only sensors but other type of devices could be also fabricated. We also use bending mechanisms in sigle-mode fibers to carry out strain and displacement measurements. 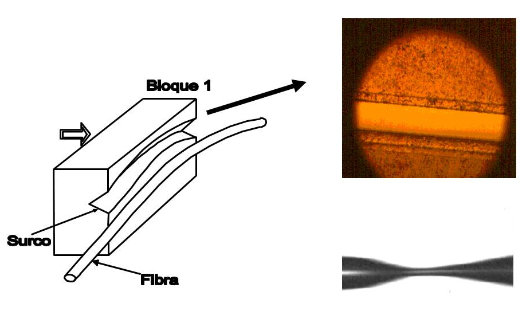 Most of the techniques, including the above mentioned, are not suitable for controlling the thickness of the coatings on the nanometer scale or to deposit materials on non-planar substrates. These are important lacks if the goal is to fabricate sensitive coatings on standard optical fibers where the dimensions of the coating determine in a substantial mode the sensor response, the signal level and the response time. Because of that, we started working on a new technique, the Electrostatic Self-Assembly Monolayer (ESA) process to build up coatings on the ends of optical fibers with the goal of fabricating sensors for measuring different parameters such as humidity or harmful gases, among others. This method is based on the electrostatic attraction between oppositely charged polyelectrolytes in each monolayer deposited, and involves several steps. It is important to notice that the polyanions and polycations overlap each other at the molecular level and this produces an homogeneus optical material.
Taking advantage of the versatility of the ESA method for the synthesis of materials, we have applied this technique to design or fabricate different optical fiber devices such as nanoFabry-Perot interferometers, optical gratings or photonic band gap structures. Based on these structures it is possible to develop different optical fiber sensors and devices. Actually, optical fiber sensors for the detection of temperature, humidity, acetone, dichloromethane, ethanol and ammonia, among others, have been already fabricated.
We have also fabricated several interferometric and polarimetric sensors by using Photonic crystal fibers for measuring temperature, strain, refractive index and displacement. 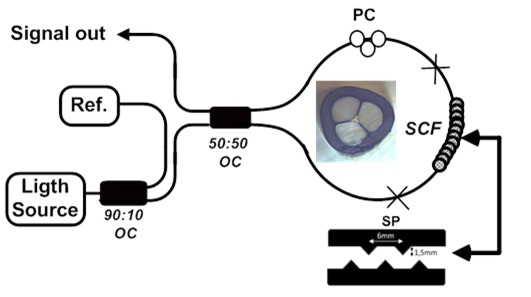